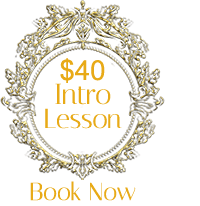 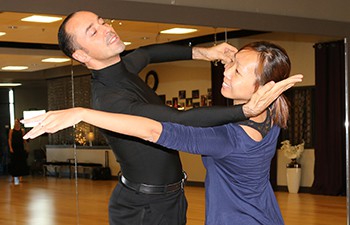 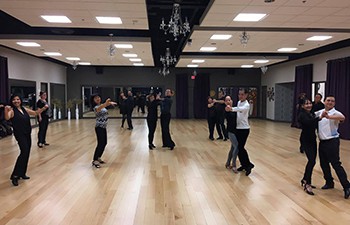 Group classes are a great complement to your private lesson. Group classes vary content from day to day and are offered at convenient hours. You will have the opportunity to meet and learn from our Elite team of professionals. Singles and couples are welcome!

Here at Elite Dance Studio, we love to invite “Best of the Best” professionals and champions from around the country to coach private lessons and group classes.

CHA CHA CHARACTERISTICS
The Cha Cha is a vibrant, flamboyant and playful dance. The light and bubbly feel of the Cha Cha gives it a unique sense of fun for dancers throughout the world. The Cha Cha requires small steps and lots of hip motion (Cuban motion), as it is danced in 4/4 time. The fourth beat is split into two, giving it the characteristic 2,3,4 & 1 rhythm. Therefore, five steps are danced to four beats as in the “One, two, cha cha cha” rhythm.

HISTORY OF THE CHA CHA
Also called the Cha Cha Cha, this unmistakable dance originated in Cuba in the 1940s. Composer and violinist Enrique Jorrin developed the dance as a variant of the Mambo and Rumba. The name is onomatopoeic, derived from the sound of dancers’ shoes as they shuffled around the floor.

WALTZ CHARACTERISTICS
The Waltz is a smooth dance that travels around the line of dance. Characterized by its “rise and fall” action, the Waltz includes a step, slide, and step in 3/4 time. Dancers should move their shoulders smoothly, parallel with the floor instead of up and down. Dancers must strive to lengthen each step. On the first beat of the music, a step is taken forward on the heel, then onto the ball of the foot with a gradual rise to the toes, continuing on to the second and third beats of the music. At the end of the third beat, the heel is lowered to the floor to the starting position.

WALTZ HISTORY
Based on basic techniques originating during the 1920s, the Waltz has continued to develop throughout the 20th century. The Waltz was born as an Austro-German folk dance known as the Landler, which was characterized by the rotating movements of partners dancing together. The music of Johann Strauss helped to popularize the Waltz.

SAMBA CHARACTERISTICS
Before Samba became a ballroom dance style, there were many styles of partner dances as well as solo Samba dances. As with the solo Samba, partner ballroom Samba has a quick beat that requires fast footwork. Over the years, the Samba has incorporated elaborate tricks, turns, and acrobatic feats into its basic set of figures. The main characteristics of the Samba are rapid steps taken on quarter beats and a rocking, swaying motion of the dancers

SAMBA HISTORY
Introduced in 1917, the Samba wasn’t adopted by Brazil as a ballroom dance until 1930. In Brazil, Samba is mostly danced solo, and remains especially popular during celebrations of Carnival. The festive mood of the dance is responsible for its continued popularity. In International style Latin dancing, the Samba is one of the five Latin competition dances.

RUMBA CHARACTERISTICS
The Rumba is a dance that tells a story of love and passion between a strong, male lover and a coy, teasing woman. Full of sensual movements, the Rumba is considered by many to be the sexiest of the ballroom dances. “Rumba” is a term that refers to a variety of dances or a “dance party.” This dance of love is one of the most popular ballroom dances and is seen around the world at nightclubs, parties, weddings and dance competitions.

HISTORY OF THE RUMBA
The dance known in the United States as the Rumba is a composite of several dances popular in Cuba, including the guaracha, the Cuban bolero, the Cuban son, and the rural rumba. All have similar rhythms that can be traced to religious and ceremonial dances of Africa. These rhythms were remembered by the earliest black people transported unwillingly to Cuba and subjected to forced labor by the Spanish colonists.

MAMBO CHARACTERISTICS
The feel of the Mambo is based mostly on forward and backward movements. The basic components of the dance include rock steps and side steps, with occasional points, kicks and flicks of the feet. Important to Mambo is the distinctive hip movement, hence the meaning of the word mambo: “shake it.”

HISTORY OF THE MAMBO
Originally from Cuba, the Mambo is enjoyed throughout the world at both the social and competitive dance levels. The mambo is a favorite of ballroom audiences because of its high energy level and infectious rhythms. Popularized in recent years by singers such as Ricky Martin, the Mambo is fascinating and diverse.

FOXTROT CHARACTERISTICS
A beautiful, romantic dance, the Foxtrot is composed of fairly simple walking steps and side steps. The dance combines slow steps, which use two beats of music, and quick steps, which use one beat of music. The footwork timing is usually “slow, quick, quick” or “slow, slow, quick, quick.” The Foxtrot must be danced very smoothly, with no jerking of the body. Timing is also a very important component of the Foxtrot. As the Foxtrot is more challenging than other styles of dance, it is usually recommended to master the Waltz and Quickstep prior to attempting it.

FOXTROT HISTORY
The Foxtrot was developed in the United States in the 1920’s. Named after its inventor, entertainer Harry Fox, the Foxtrot is often associated with the smooth dancing style of Fred Astaire and Ginger Rogers. It has become one of the most popular ballroom dances in history.

PASO DOBLE CHARACTERISTICS
The Paso Doble is a theatrical Spanish dance. Traditionally, the man is characterized as the matador (bullfighter) and the lady as his cape in the drama of a Spanish bullfight. The dancers may choose to enact the role of the torero, picador, banderillero, bull, or Spanish dancer, and may change roles throughout the dance. Based on Flamenco dancing, the Paso Doble is both arrogant and passionate. The Paso Doble is performed more as a competition dance than as a social dance.

PASO DOBLE HISTORY
The Paso Doble originated in southern France and began gaining popularity in the United States in the 1930s. Because the dance developed in France, the steps of the Spanish Paso Doble actually have French names

CHARACTERISTICS OF QUICKSTEP
Elegant, smooth and glamorous, Quickstep dancers are energetic while appearing extremely light on their feet. It should appear that the feet of the dancers barely touch the ground. Much like the Foxtrot, dancers should strive for elegance. Upper body posture must be straight and strong throughout each movement.

HISTORY OF THE QUICKSTEP
The Quickstep was developed in the 1920s in England. During this time, many bands began playing the Foxtrot at a faster pace, earning the name Quick Foxtrot. The Charleston appeared after this, but lacked long-term potential. However, in 1927 the Charleston was combined with the Qucik Foxtrot resulting in a name that was much too long: the Quick Time Fox Trot and Charleston, so it became known simply as the Quickstep.

VIENNESE WALTZ CHARACTERISTICS
The Viennese Waltz is characterized by sweeping turns that move gracefully around the floor. This dance is known for its simple and elegant rotational movement.

VIENNESE WALTZ HISTORY
The Waltz developed in Central Europe, originating from the Austrian folkdance known as the “Landler.” The dance arrived in Vienna during the 1800s, then became popular throughout Europe and America. The music of Johann Strauss helped to popularize the faster, elegant Viennese Waltz.

TANGO CHARACTERISTICS
The feelings expressed in tango are that of men and women in real life. These opposite moods coexist in tango. Good tango music has a lucid rhythm that is easy to dance to, but its melody is soft, beautiful, and deeply sentimental. Each note or phrase expresses the masculinity, strength, resolution and firmness of men, or femininity, softness, obedience and affection of women. The two opposite moods intertwined and respond to each other, reflecting the man and woman in the dance.

TANGO HISTORY
Early tango styles greatly influenced the ways in which we dance today. Tango music has become one of the greatest of all music genres throughout the world. Spanish settlers were the first to introduce the tango to the New World. Ballroom tango originated in working-class Buenos Aires. The dance spread quickly through Europe during the 1900’s, then moved on into the United States.

CHARACTERISTICS OF JIVE
Jive and East Coast Swing share many figures, as well as the same music style and tempo. The basic look and feel of Jive is lots and lots of energy, with the legs portraying a pumping action. Both the East Coast Swing and basic Jive consist of two triple steps and a rock step. The Jive differs in that the count begins with the rock step, which is counted “1,2.” The two triple steps are counted “3 and 4″ and “5 and 6.”

HISTORY OF JIVE
Originating in the United States in the 1940s, Jive was influenced by the Boogie, Rock & Roll, African/American Swing and Lindyhop.